Winterkill 2010?
With colder than normal temperatures in Arkansas this winter, we are anticipating that some of our turfgrasses around the state may suffer from winterkill. To help prepare for this we are publishing a four part series on this topic to help turfgrass managers prepare for what may await them in the spring. Look forward to the following topics over the next four weeks.

Part I: Predicting the damage: What causes winterkill and how can we estimate our losses?
Part II: Preparation and recovery: What should you do or not do this spring to help your turf?
Part III: Planning and planting improved cultivars for a better future.
Part IV: Practices to enhance winter survival. 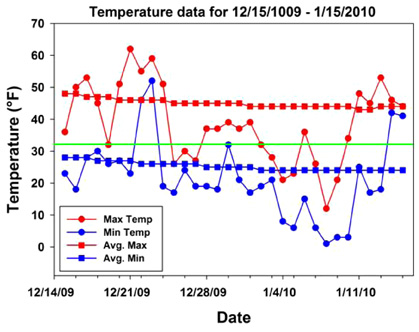 Which areas are more likely to suffer winterkill?

How can we estimate our losses? To help determine just how much winter injury you might have following these steps.